Here is what I wrote on this annotation page while this poem was awaiting publication:

Often I post annotations and “behind the scenes” information about these pieces even while they await publication.

However, Elude is different. The unique character of the poem makes giving a “behind the scenes” look impossible without referencing the published poem. I can’t wait to share it with you. 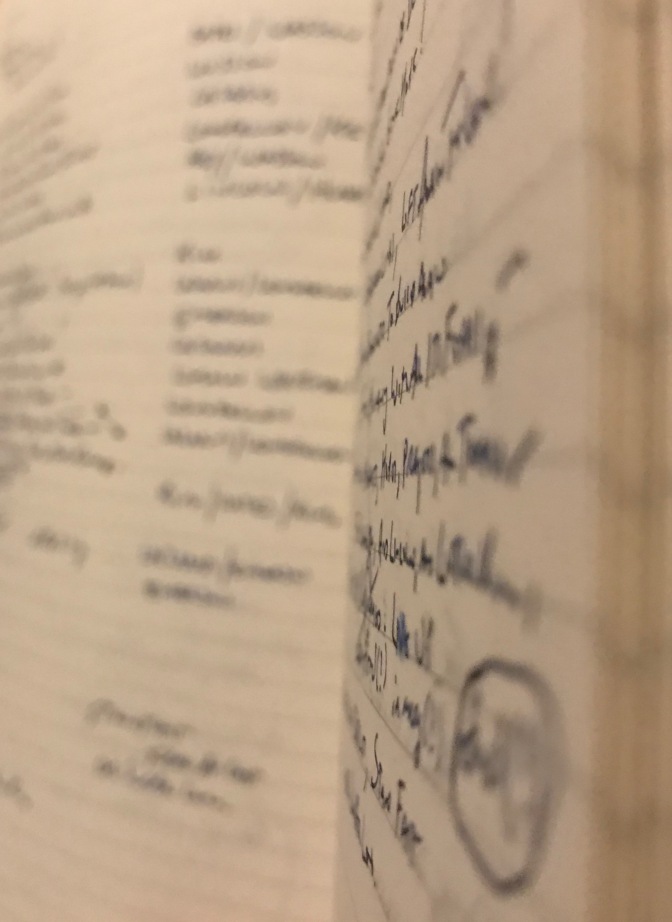 Elude mid-draft , well underway, and obscured (I can’t wait for you to see it!)

What was unique about this piece? It was composed of a series of snippets of words and phrases from a wide variety of important sources, that I thought gained interesting poignance in their juxtaposition.

Here is the list of sources of the phrases. 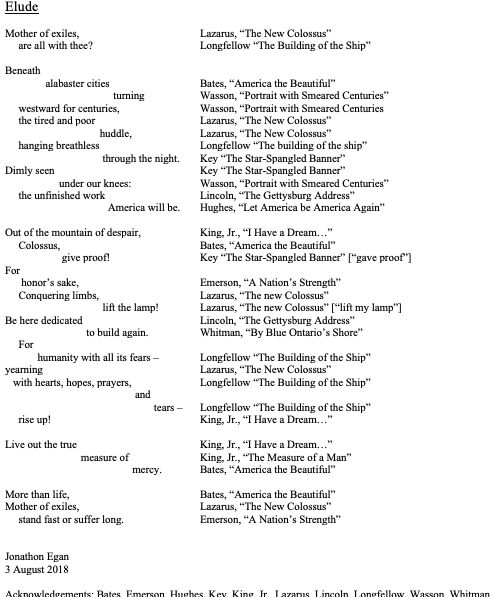 So about the poem, “Elude.”

The title of the piece summarizes the poem and my feelings: there is an ideal we never seem to achieve (or even agree on, sometimes). Wasson, Hughes, King, Jr., Bates, Lincoln, and Lazarus all made that clear in their source material for this poem. That ideal? It’s mercy. That ideal is liberty and justice for all.

Whose land is it?

Native peoples were here before the Europeans arrived, slaves were forced here, immigrants have arrived (including my ancestors) and have been at times welcomed and at times derided or scapegoated, and we all of us live in the aftermath and crucible, sharing (or not) an experience and idea of what America is and means. My own ancestors were on the Mayflower nine generations ago. My own ancestors were also driven out of the United States for their religious beliefs four generations ago (and then later reabsorbed into the country). Thousands of displaced persons now appeal to us as a nation, most of us being the children or grandchildren of immigrants, here at our national doorstep, hoping for mercy and often finding none.

Nations are grand concepts – they are ideas we share. When we as fellow citizens don’t share enough of the idea in common anymore, we don’t live in the same country, despite our geographic proximity. Here are three of the most important ideas about America to me:

Some of the included poems that serve as snippets to build Elude are traditional paeans to America, Americana, and patriotism (in the traditional, mainstream sense). Some of these are appeals to our better selves, or are laments. The national anthem and the Gettysburg address are represented, as are heartbreaking witnesses. There is a jarring piquancy in the colocation of Langston Hughes and Abraham Lincoln, and Michael Wasson and Francis Scott Key in “Dimly seen under our knees: / the unfinished work America will be.” These remind of this essential point: Bates was praying, not describing the present, when she wrote these lines in “America the Beautiful.” Each of these statements is a prayer for something yearned for that might yet occur:

“God shed His grace on thee
And crown thy good with brotherhood
From sea to shining sea!”

“God mend thine every flaw,
Confirm thy soul in self-control,
Thy liberty in law!”

“May God thy gold refine,
Till all success be nobleness,
And every gain divine!”

“God shed His grace on thee
And crown thy good with brotherhood
From sea to shining sea!”

So that someday, perhaps what we yearn for, will no longer elude us all.