When I first started brainstorming this poem, and realized I was going to write seven stanzas of seven lines each, I started thinking about things that came in sevens – and how I could work them into the poem.

Lists of sevens, with brainstorming and research about the origins of the names of the days of the week

I picked seven of these “sets of sevens” to use, and paired one set with each stanza. What I did next may seem a little crazy.

I thought about how to reference, however indirectly, one of each of the seven items in a list in one of each of the lines in a stanza. For example, in the order of operations in math, the first order is ‘parenthesis.’ I turned that into the two words “par enthesis,” meaning “by” (par) “fibrous adhesion” (enthesis) – referring to inosculation. Then I wrote a line about “Eden’s bloody cambium” in the first stanza, referencing the fibrous enthesis/inosculation formed when grafting at the cambium. So the “cambium” ties to “parentheses” through the concept of enthesis/inosculation. The second in the list of seven orders of operation, about “power” or “exponents,” gets a line about “godly might” or godly “power.” The lines aren’t about the math order of operations, but I wrote the stanza, trying to make what I wrote meet the point of the stanza while also doing this behind the scenes logic puzzle to connect to the lists of sevens.

Work on the “set of sevens” for Modus Operandi

So, again, the stanza isn’t about the math order of operations, but it was influenced by a puzzle I set myself, which was to write a stanza that had the content I desired, but force myself to somehow influence each line by a specific math order of operation. In a way, it was like writing a haiku or writing a sonnet – I had given myself a set of specific constraints to answer to. I did that for most of the other stanzas. I didn’t make it through all of them that way because 1) it was exhausting to figure that out, and 2) the closer I got to the end of the poem, the more I had written myself into a corner. That is, I didn’t have limitless flexibility at the end to conclude the poem. So where I had a bit more flexibility in earlier stanzas to take an interesting road that this puzzle put me on if it was still going in the right direction, I still knew where it had to end, which made the later stanzas too challenging to also couple against one of the “sets of seven.” Here are the rest of them that were influenced by a set of seven and how they relate:

Chadash (Set of seven: Days of the week)

Thursday – traditional: Maundy Thursday – stemming from “Mandatum” – meaning Mandate – referencing the Last Supper and “a new commandment I give unto you” – in this line of the stanza in Latin: “mandatum novum…”.

Saturday – in Scandinavian languages, Saturday is Lordag (etymology), meaning or deriving from bath day – with “lor” referencing “lye” used to make soap – and the word “lies” is in this stanza, sounding like “lye”

And basically everything I learned about those words probably comes from wikipedia. 🙂

Clingstone (Set of seven: the seven deadly sins and the seven virtues)

Envy/Patience – the concept of Clingstone – clinging/envy. But no stanza line directly.

Pride/humility – known and new – humbled but not debased

This is where I started to let the process of “the sets of seven puzzle” break down. Going through this process of trying to be influenced by a set of seven related phrases line by line in each stanza influenced my thinking and made me “work for it,” but when it led me to complete a stanza I was as satisfied with as I was of “Clingstone,” I let myself be happy with the stanza, instead of worrying that I hadn’t satisfied all of the seven words in the list. I struggled and struggled with “Clingstone,” and felt like I had a major break through when I completed it. I’m really happy with this stanza.

Barley – phylacteries/the tefillin strap was traditionally the width of a grain of barley, the sign of remembrance of deliverance out of Egypt – “memory, bound”

Olive – anointing and the anointed one “Messiah” in Hebrew, “Christ” from the Greek – “boundless gift in grace”

Grape, Fig, Date – “vine and fig, and honey flows” (as translated in the Old Testament, “honey” probably referred to a derivative of dates)

Here you can see the logic puzzle of “sets of sevens” breaking down further. I intended to have each line of the stanza influenced by a single item on the list of seven items, in this case, the seven species or Shiv’at HaMinim. However, the last line of the stanza represented three of the species in the text, and two other lines of the stanza didn’t represent any of the seven directly. But all seven made it, however obliquely, into the stanza.

And here is where the tie to the “sets of sevens” stopped. 🙂 I wrote out the seven creative periods, intending to have some behind the scenes logical tie between something about each creative period and each line in the stanza of “Drupelet” – but then the poem/stanza came to me more or less in a blast. What I wrote down for this stanza was pretty close to the final version (at least all of its ideas), and this is one of my favorite stanzas in the poem. 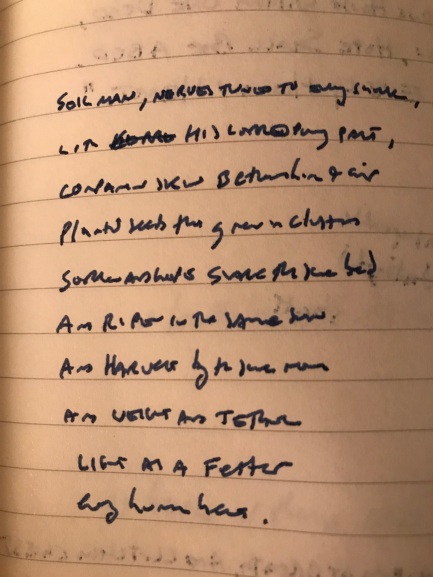 Drupelet – when it basically came to me in a single shot. I still had to work it out, but most of the final ideas are here in one form or another. For those without the ability to translate my handwriting (most people), here is what this very early draft of this stanza says “Soil man, nerves tuned to every shock, / with his corresponding part, / companion skin between him and air / planted seeds that grew in clusters / sorrow and hope share the same bed / and ripen in the same sun / and harvest by the same moon / and weight and tether / light as a fetter / every human heart.”

The remaining stanzas did not end up following sets of seven.

Okay, you read this far, so now you deserve to know…

but what does it all mean? 🙂

Jump to any part of the annotation here (including directly to the stanza by stanza descriptions):